Bridge is getting back to normal! We are no longer supporting on line playing. All our playing is done in person. People are happy to be back with their friends. We've lost some of our momentum we had pre-Covid. Before we often had 4 or 5 tables with 16 or 20 people playing. Now we have 2 or 3 tables with 8 or 12 people playing. That will change as people get back to their old habits or we attract new members. We are still a vital group of people who play Bridge!

​The current coordinator has left her post and a replacement person has been found. Stay tuned information about the new leader.

Having played most of the winter online, our players were suffering from online burnout, and it was the decision of the leader to get us back to playing in person. After Dr. Henry gave the OK to the province being able to have company in their houses, we started doing just that, playing the normal way. Until April 8, Bridge was also available online and we have a few people who continued to play online for a little while.

However, as of May 8, all Bridge is being played in person. We are back to normal after covid times! Here's how it goes:

May 2022 - Life is Normal! This is how we play:
​
The bridge group presently consists of 30 active members. We play a friendly game (really!) of Bridge, and we have a lot of laughs. Our group is very cohesive and enjoys players of all levels. We play to be social. Winning comes a distant second and reasonable table talk is not discouraged. (All current members of the group are double vaccinated.)

Currently we play the first Monday of the month, followed by the second Tuesday, the third Wednesday, and the fourth Thursday.

The week prior to the game, players will get an email asking if they want to play and the date and day they will be playing. We always play at 7:00 pm and play 5 rounds of 4 games. We play in members' houses. While we wait for the variants to leave, won't have more than 2 or 3 tables per house so, if necessary, there can be two houses hosting. If you wish to play, you answer the email with a short message saying you want to play. If you are willing to host up to 12 players (3 tables) you can mention that in this email. Then, a list will be emailed in a couple of days, stating who is playing and whose house you'll be playing at. Sometimes there'll be a request for more players, if we don't have enough to make an even 8 or 12, etc. The number must be divisible by four.

On the night, everyone puts a loonie into a pot and that is awarded the winner(s) and possibly the most unfortunate player, depending on numbers of players. We all also contribute a quarter to the Slam Pot, which accumulates until it is won by two players who bid and make a GRAND slam!

Many thanks go out to all the people in our group who developed the trickstercards.com system, which we used for much of the two years we were unable to play in person, and to all the anchors and hosts! It was a very challenging time for all of us and our group has met the challenges beautifully!

We currently have no waiting list and can take a couple of new players. You should be able to play Bridge, to join us but, as long as you understand the basics of the game, you'll be welcome. If you wish to join, please go to the Sign Up Page.

The bridge dates are available on the PROBUS calendar monthly.
Summer Picnic of 2021. Nice looking bunch!

I have neglected this site for the last few months, while I was away in Mexico. I arrived back on the day Quarantine was introduced. After the first days of Quarantine, we were all itching to play Bridge, as I'm sure all the other members of all the Probus groups were. And then Joe found Trickster and passed it on to Dorothy, so passed it along. We now have 27 of our 34 group members using Trickster! So, on April 21 at 7:00 pm Bridge was back up and running with 20 people playing! A lot of work went into making the experience a success from making up lists of phone numbers and instructions to the people playing, to planning a spreadsheet of who played with whom, to Anchoring a "table", to keeping the scores and passing them along. This was a tremendous effort and now Bridge is reborn in a new format! Congratulations to all the members who played last night. See you next Wednesday!!! (And I can't wait to see you all in person, one day!)
​ 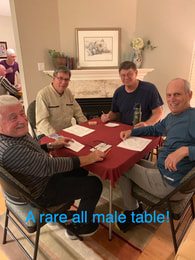 In October, the group leaders (Dorothy and Vicki) met for coffee with our fellow Probus Members who are on the wait list - Mary and Laraine. Lael was also at the meeting and has been taken off Wait List Status and is a full member of our Bridge Group. WELCOME LAEL!!! We met at The Mill in Comox and had a lovely time chatting about all kinds of things and, of course, Bridge. We explained our situation to Mary and Laraine and they were told we would call on them as spares when appropriate. They were very amenable to this and hope that they will be admitted when we have more room. Dorothy and Vicki are reviewing this on a regular basis. We are still having quite a few nights when we have a full complement of players (20). We will not go above 20 players because our hosts can only handle so many!

We introduced a different scoring system on October 16; one that is used more often these days when playing Chicago Bridge. It includes scoring for Vulnerability. Lorna introduced this system to a group of 20. The rest of the players who are not familiar with the system will be brought up to speed when they play. Many thanks to Lorna for taking this instruction on! She was well received. Sheets with a scoring chart were passed out and will be available at all tables in the near future, but we urge players to know how to score without the chart.

This month we played at Shelley's on September 30, Phil and Marie's on October 8, Vicki and Robin's on October 16 and Dorothy and John's on October 24. Thank you to all the hosts!!!

This month was an exciting one for some. I know Karen and I bid and made a small slam, and speaking of slams, the slam pot was reintroduced. We all put in a quarter (if we choose to participate) and if someone bids and makes a grand slam, they win the pot. Since this is a rare occurrence, the slam pot can grow quite large! We played at Martha and Michael's, Susan's, Liz's and Shelley's. We had 2 weeks of 12 players and 2 of 16. Here are a few shots of some of the players. The scores presented were from September 30 at Shelley's and are really high scores! Look at the beautiful people smiling at you! ​

August found us playing on Tuesday twice, to give players the opportunity to join in BC Day festivities. We played a four different homes, including Lindsay, Martha and Michael, Sylvia and Susan's homes. We found that we had 16 players or 12 players this month. Everyone continues to enjoy their Bridge Group, with all members staying active as we started the new Probus season. The Leaders are working to find a way to accommodate our growing Wait List.

The Bridge Group celebrated our founder Liz McCullough who has been leading the group for five years. At first the group hosted two tables of Bridge Players, once a week, and, under her guidance has grown to 40 members. We now host as many as five tables (20 people), and continue to play weekly! Liz recently retired as group leader. Everyone at the celebration, held at Locals, is grateful for the friendships that they have made through the group, and thank Liz for this. We wish her well and are grateful that Liz will continue to play Bridge with us! ​

Half of our Happy Bridge Group!

Our Bridge Group was active this month as always. We continue to be committed to keeping our games as homey as we can and this month played at Karen's, Vicki and Robin's, Margaret Furgeron's, and Bruce and Ena's homes. The points winners this month were Betty and Lorna who won twice! We all continue to improve our game, while keep our level of enjoyment high.

Bridge continues to be a going concern! This spring we've had many weeks where we have 20 members playing. We're happy to say we've been able to accommodate most of our spare (wait list folks) players at least sometimes! On June 3 we split the group of 20 between two houses. Valerie and Skip took 8 players, and Lorna took 12. The following week Marilynn took 3 tables of 12 players. Betty accommodated us on June 19 with 4 tables of 16 players and, on June 27, Shelley hosted 16 players. We all chip in a loonie at the beginning of the games and our winners can win up to 8 or 9 dollars when we have 20 players. It's a fun end to the game, as players often linger after helping to clean up, to see who won the pot! A loonie also goes to the lowest score, to encourage them! :) 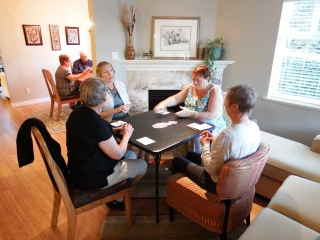 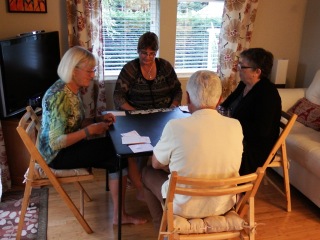 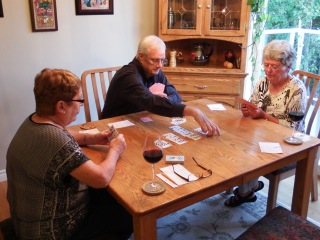 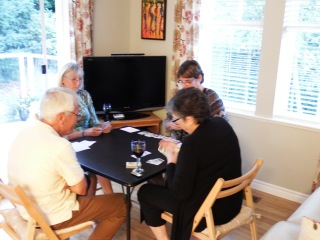 The Bridge Group met four times this month. On May 6 we travelled south to Ann and Stu's. We had three tables, and enjoyed Ann and Stu's wonderful hospitality and view. On May 14 we had five tables at Vicki and Robin's. When the group is this large, we have a rollicking good time! Next it was off to Ann and Joe's who hosted five tables. We again enjoyed a great view with healthy prizes at the end of the night. Finally, on May 30 we split into two groups and hosted five tables; three at Lorna's and two at Martha and Michael's. We send a big shout out to all the hosts whose participation helps to make this a happy and cohesive group. 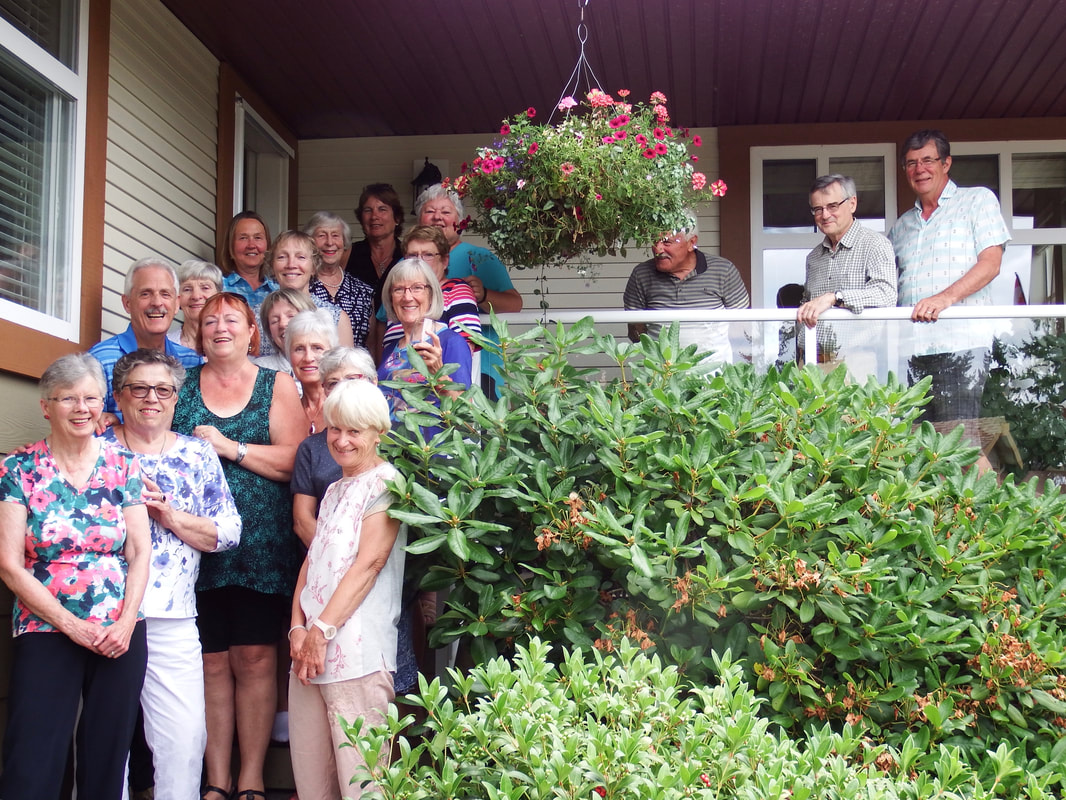 THIS GROUP IS FULL AND IS NOT ACCEPTING NEW MEMBERS AT THIS POINT, BUT WE ARE KEEPING A WAITING LIST.